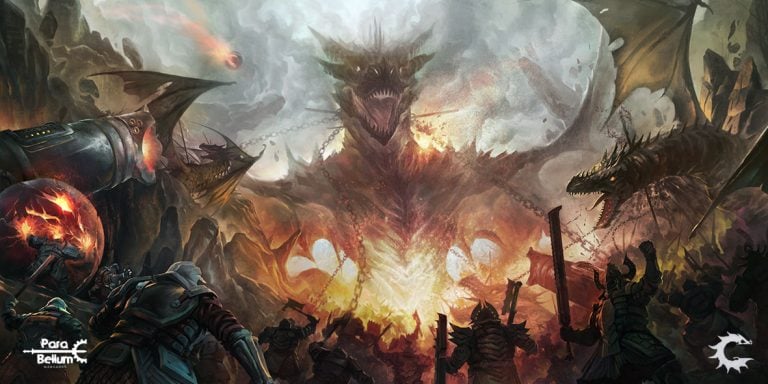 The metal armor of his troops clanged around him in short crescendos, their fighting yells trying to surpass the clamor of the battle around them. It was not easy. Somewhere in the back, war drums tried desperately to coordinate his men’s thirst for blood, combat, revenge, to little avail. Direct orders screamed and enforced even by blows were more readily followed than the drums. A mental note for the future: once the thrill of battle consumed his men, drums and horns served little. Each warrior became a killing machine, to be channeled by force if necessary. In the meantime, he could feel proud by how readily his officers had adapted to this and were fulfilling their purpose. One of them turned and looked at him, sword raised. She yelled something, pausing mid-sentence as a cannon fired, drowning his voice. Then she had to stop again, as the distinct rattle of a massive chain echoed, bouncing for some time against the sharp, naked rocks prepared around them.

Fire roared and rock started splitting with piercing, heavy crack sounds, as rounds for the cannons were prepared all around the battlefield. Realizing it would be impossible to be heard, the officer rushed to his side, ducking by reflex and wincing, as an enemy roared in pain near them. Wincing… This confused him. The duck was a good reflex. But why wince? The distinct sound of spears piercing flesh was heard. Another cannon fired, more chains rattled, another enemy falling. Truly, why wince? Could she not hear it? Amidst the breaking tons of rock, the explosion of cannons and the deafening rattling of enormous chains, amidst the yells and roars of wounding and wounded, amidst all, one sound prevailed and reached his ears with clarity… no. Not amidst, he realized now. It was part of it. All the rest was a symphony that underlined this one, beautiful sound, this salve of satisfaction, focus, purpose.

He barely heard his officer as she was pointing at the Old One ahead and describing the situation.

“HE IS OF EARTH!” she screamed, as he scanned the scene. “OUR FIRE HERE IS TOO LITTLE!” He nodded thoughtful. The plan had worked so far but it would not be long before the Old One could take flight again. It was the trouble with Fire and Earth attuned Old Ones. The Gifts of the Dweghom were matched. But there were solutions. He gave his order but another dragon fell, crashing rocks, a cannon and several of his men under it. The officer leaned closer, wincing again.

“Break the earth where he stands” he said again, this time calmly near her ear. “Break the earth deep, break it until he falls to the lava pits below”. Taken aback, she looked at him.

“Our men are there” she muttered. “The Rook won’t hold”.

The symphony around him endured and he reveled in it, as he pondered on her words. No. She was wrong. It had to be done. The Old One’s struggling roars only served to build for the end. The cannons would stop firing. The drums would stop beating. The chains would stop moving. One by one, all other sounds would be silenced, as the long, desperate roar of the Old One falling would lead to the inevitable crescendo of the victory cries of the survivors. He valued his men but there could be no other end.

“They will die!” she added.

Such is War, he thought.

“They will die free” he said.