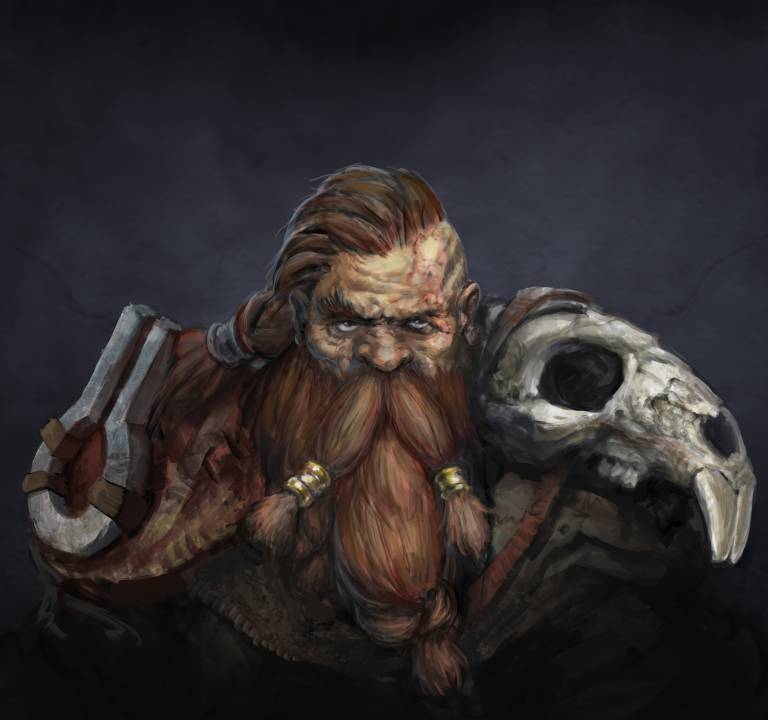 “We each wage petty little wars around ourselves, without meaning. We turned the very weapon of our freedom into the shackles of our kind, fearing our own blessings, our own strength and putting numbers and measures in our very freedom.”

Alekhaneros was born in the Dheubrodsûn clan of Ghe’Domn, where many lesser clans led by Thanes are housed, all of them under the rule of the Hold’s Raegh. In theory, this arrangement could provide prosperity and to an extent it has but in earnest it mostly serves as fertile ground for conflict and opportunities to gain Aghm, with entire clans ever wrestling to prove their superiority over the others. As a cadet, Alekhaneros showed immense promise from a very young age, his mentality, however, branded him as an oddity and never allowed him to excel. He showed interest in the weirdest things, like the Tall Men and the surface but, worse, he objected to many of the traditions and practices of his people. Because of this, he grew up repeatedly challenging and being challenged by his seniors and superiors, only to be put down for his insolence. On one hand, this allowed him to hone his skills, constantly battling stronger opponents than him, on the other, however, he lost valuable Aghm time and again. This forced him to a position of mediocrity despite his prowess, serving his own same-blood and closest friend, Gheshvirbrod, as a mere member of his following. For a long time he accepted this fate solemnly, even if never with satisfaction.

True change in his life came during yet another battle between clans, when, refusing to let Gheshvirbrod along with two bands of their clan’s warriors die, he fled before combat in order to bring reinforcements. He accepted the loss in both Aghm and respect his decision brought him, for he believed that the “obsession” with Aghm restricted the worth and power of the entire Clan and Hold, for the wider picture and strength of the clan were being sacrificed in the altar of individual worth. What he never accepted was the dismissal from Gheshvirbrod’s following. He left the Living Halls, descending to the depths below the Hold, in a self-imposed exile in order to prove that worth can be found beyond the ways of clan and Hold. Many argue that he did so beyond anyone’s imagination but many more underline the irony of his method, for what he did was very much to undertake the Ardent Dheukorro.

True enough, Alekhaneros returned as a prime example of an exceptional Kerawegh. If his following of Flame Berserkers and his own accounts of “hearing” the war above and even the world itself spinning were not proof enough, then the influence he effortlessly exerted and the inspiration he offered upon his return that saw him gain control of his clan and inspiring more to follow, surely serve as evidence. In the Living Halls, he spoke of a War beyond Clans or castes, a War that Eä herself was waging, a War from which the Dweghom would be absent, should their ways not change. Advocating that old feuds are but new shackles that must be broken and that new goals must be forged, he has accepted Sorcerers and other Tempered as advisors causing even the Ardent of Ghe’Domn to not follow him in unison. Despite his many enemies, with his Flame Berserkers at his side, he quickly claimed Clan Dheubrodsûn, soon after calling all clans to follow him to the surface united. Ironically, or perhaps in true Dweghom fashion, his very words caused the entire Hold to erupt in unprecedented violence but Alekhaneros dismissed these conflicts as petty squabbles without true purpose or meaning. Named Azdhaen, the Fire Thane, for his Flame Berserker followers by those who rallied to him, he led three of Ghe’Domn’s lesser clans to the surface, with Orobdhuo as his destination, where Nord forces have landed outside its gates, declaring they are there to reclaim a stolen Dragonblade.

While the true motivations of the Fire Thane remain unknown, he seems set on reviving the Dweghom as a force that affects the entire world. When it comes to the other races, he has perhaps achieved this to an extent already. Knowing mystery and suspense to be powerful agents in capturing the imagination of the Tall Men, he moved his troops as stealthily as possible, removing any chance witnesses he encountered along the way. Instead, as an announcement of his presence to the world -and as a “warm up” for his troops as he claimed- he destroyed the forces of Nepenthe and some of Riismark, entirely removing the town of Vatsdam from the map in the process, while making sure enough evidence of Dweghom involvement was left behind to be found. While it would not be long until rumors of the Dweghom being on the surface again would spread fear among humans and Exiles alike, the wisdom of this attention is doubtful, as he roams lands that offer no allies or shelter.

When it comes to the other Dweghom, however, his actions may have well earned him more enemies than admirers. The Tempered of Ghe’Domn were only empowered by his antics and his Hold’s Raegh is furious with his deeds. Many Ardent could very well want this antagonist removed as well, while one can only guess what the Mnemancers truly think and do under the façade of passive observation of this breaker of tradition or how any other Hold will react to the knowledge of clans walking the surface again. Perhaps more tragically, however, it is in no way a certainty that he himself has escaped the shackles of tradition he claims to have broken. Already he has caused the kind of division which he denounces and Alekhaneros may very well be walking a path all too familiar to the Dweghom. For in his heart the Fire Thane knows that to win the hearts of all Dweghom, he must win their respect. And in the entire history of his people, there has only been one enemy the Dweghom deemed truly worthy…