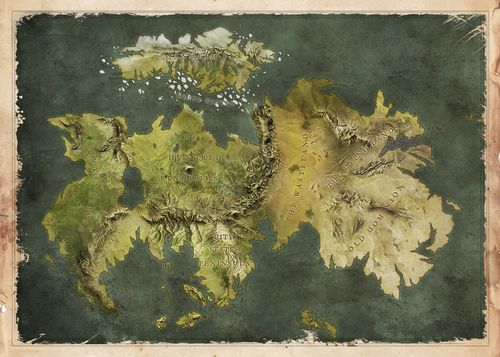 More than six centuries have passed since the Fall changed Eä. Humanity struggles to rebuild after that cataclysm and the Long Winter that followed. With the Hollow Throne empty, the Hundred Kingdoms remain embroiled in internecine warfare, as the Nobility covets the remnants of the Empire, while the Church grinds its teeth at the weakened Orders. The City States of the south struggle to recover from the collapse of their paradigms at the hands of demagogues and tyrants. To the north, the Nords have finally left behind the horrors of the Fimbulwinter and the rule of the Jotnar, and have started expanding from their shattered realms. They turn their covetous eyes to the rich lands of the south, lusting for revenge for their murdered gods.

With mankind far from the glory and might of its Old Dominion, the enigmatic Spires exert their power for the first time in eons. Shedding millennia of custom and practice, the merchant princes seek the wealth of the lesser races, in an effort to break the stranglehold of power the Directorate and the Sovereign House exert. As the vicious games of these elders spill into the mortal realm, misery and warfare spread like a disease from their domains.

While the clamor of war spreads, the wisest amongst those living fear the rising of the Dweghom. Deep in their Holds, they hear the clamor of battle approaching and feel the pulse quicken in their veins. They are the eldest disciples of War. The last time their Hosts marched to battle, the eternal reign of Dragons came to an end in a conflict so violent the land itself withdrew.

Far to the east, darkness is gathering. The fearless Tribes hurl themselves against the Claustrine Gates as their lands shrink. Their warbands are unable to contend with the ancient evil that stirs in what was once the heartland of the Old Dominion…