The Last to Stand Guard 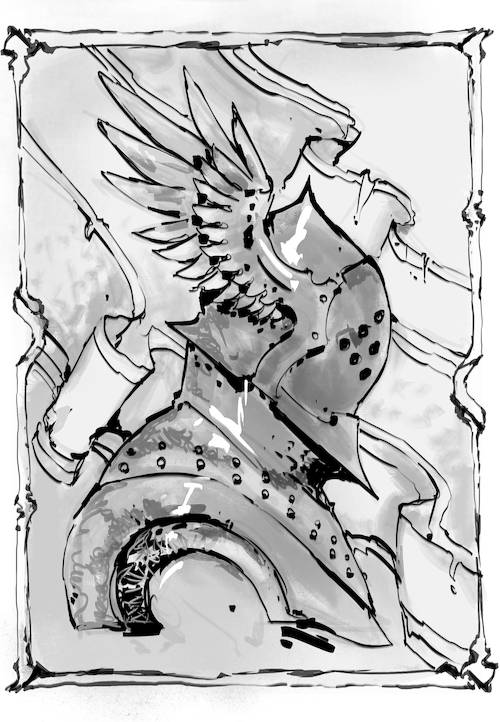 Most of the events of the Fall and the Old Dominion are forgotten today, save perhaps by the most learned of scholars. Rumors from the last waves of refugees would in time become legends, myths and bardic tales. Perhaps the song that has endured most since ancient times is “The Last to Stand Guard”.

In a metaphor that captures the bravery and sacrifice of the Last Legion, “The Last to Stand Guard” praises their patron god as the last standing god of the Pantheon. The song names Cleon as the last refugee to arrive at the Gates of the Gap, appearing before the Gates long after even the last of the refugees had passed, with his weapons shattered and his armor rent, carrying the body of the goddess Ninuah in his arms. Alone, surrounded by the darkness of the Long Winter and the smoke and ash of the Fall, Cleon remained true to his role as warrior and protector. He kept fighting to safeguard the passage west for any who could be saved, battling maddened old gods, bloodthirsty worshipers who craved human flesh, and the rotting remnants of the Dominion. Drained, dying, Cleon asks to be given a warrior’s death at the hands of his own followers, naming them as the first Knights to follow the First. Many a Knight Errant of the Order of the Shield have been known to sing this song in their travels, reminding common folk that the Order still stands for the values of the Legion that birthed it.

In a variation especially popular among the Braeon Highlands, Cleon delivers the body of Ninuah to Akelus, a Kelton legionnaire. He is entrusted to carry it to her favored people, a metaphor for their descendants, who never forgot the protector of their forefathers and, in fact, still worship the Mother above all Aspects to this day. A separate song, “The Parting Gift”, reiterates this motif and expands on the Goddess’s role. It was her blessing that offered the waters of a vast lake, the Bounty, as her gift to her people and the answer to the whispers of a promised land the Keltonni druids spoke of. To make the Bounty, Ninuah passed on all her remaining strength, ensuring that the destruction of the Fall would be mitigated and that, even in the cold darkness of the Long Winter, her people would have shelter and fertile land. In time, her gift would turn sour and the Bounty would become the Bitter Sea, as its waters mixed with the salty tears of the survivors of the Dominion.

Many more songs explore the final deeds of these two gods and all of them speak of their sacrifice in the end. Considering their continuous efforts to counter Hazlia’s mad schemes, this is very possibly true. While the real fate of Ninuah and Cleon is obscured behind too thick a veil of myth and song, it is a testament to their success that, to this day, folk of the Hundred Kingdoms remember these two gods and their sacrifice, one way or another.