On the Streets of Sieva 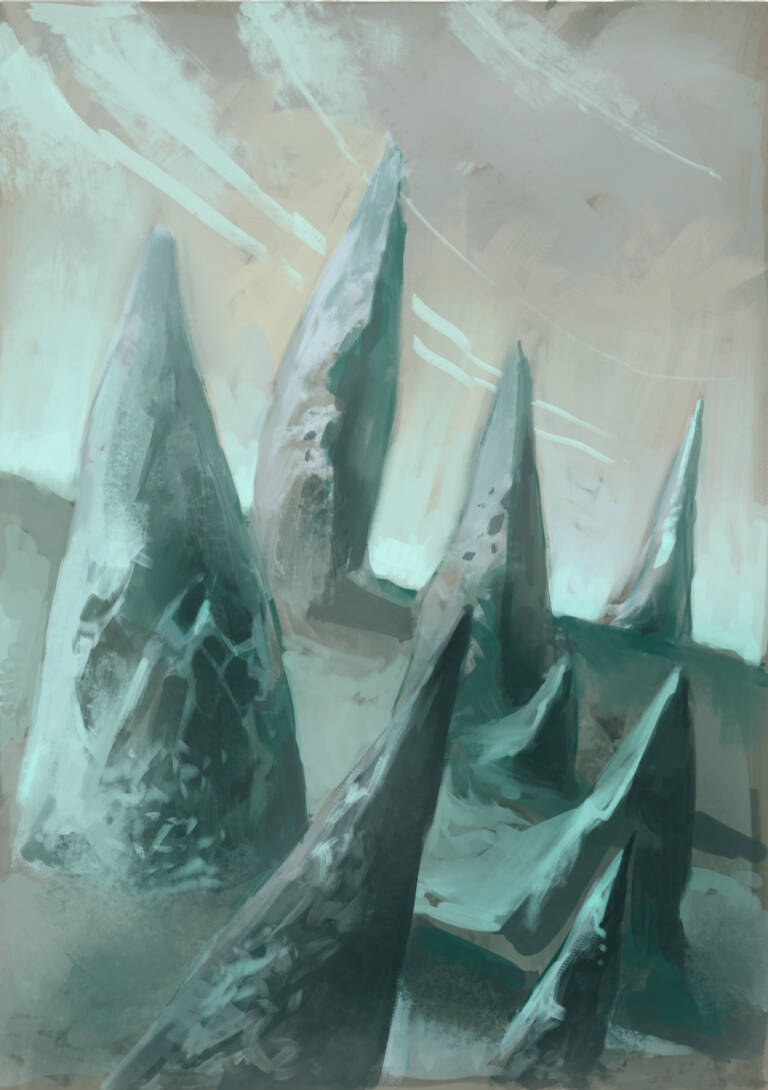 The veterans used to say there is always a time. One cannot truly escape it. They said that those who do try to escape it become like rocks on a mountain slope. They stand there, high above, looking at creation, motionless and grim. The elements will lay siege on them. Winds will whip them. Rain will gnaw at them. Snow will cover them. Hale will scar them. But still they will stand, firm. All that they will have suffered, all the scars and cold and silent pain, all the forces that would try to break them, all of it, would simply forge them. Little by little, their mind and body would be brought to just the right shape. Their edges sharpened, their weakest parts dissolved, their core strengthened from the pressures of the world, their path decided as firmly as the stone they are made of. And then, without warning, without the slightest indication, under the heat of sun’s Light, their will would expand and push their body, and they would fall upon the world, laying waste to everything in their path. Neither angry, nor vengeful; perhaps not even willing. Simply inevitable.

She had shaken her head, then. She would wear the regalia, yes. She would carry the hammer and Shield. And she would honor and serve them but not through violence, she had said.

But now it was time.

The club had come out of nowhere. It had almost broken her skull sending her undone helmet flying off, but had settled for a tooth, which she had swallowed involuntarily. A snicker came from above her, taunting laughs and a cry reached her distantly. A girl. In her pain, she remembered in a flash; a Household’s colors dancing; a crazed, hard-skinned veteran’s face, too close to hers.

Her eyes widened even as she knelt, stunned and surprised, barely feeling another blow on her back shoving her down. She felt the kick on her side though, taunting more than damaging. Another flash, too horrible to contemplate. Her mind screamed. Then it paused.

Her eyes calmed. She had looked passively into this world for long enough. The same sins, the same crimes, the same monstrosities. The same duty and the same burden. The words of the veterans came to her mind.

“It is time,” she admitted.

She wiped the blood from her lips with the back of her hand, her mind reaching the source of her strength, forgotten and unused for so long. Her grey eyes flared like silver with anger and purpose, narrowed, scanning the dead-end alley before her, as relief from the pain poured over her. Four of them. The one who had hit her was covering her and the entrance, hidden unless you knew where to look. A second one stood in the middle of the alley, but was looking at the scene at the back, his hand resting on the dagger on his belt. Two at the end of the alley, laughing at their prey, who struggled to keep them at bay, wielding awkwardly a simple plank of wood.

“Stay down,” the one over her said when she moved, eyeing her but not making a move, still minding the entrance. “We’ll be with you and your pouches in a second.” She frowned at this.

She reached for her fallen weapon.

“Don’t turn a robbery into murder, tomboy,” the man above her said. A punch searched for her jaw again but this was no longer the same unprepared person that walked curiously in the alley moments ago, driven by the laughs and yells. She dodged with ease, as if her body couldn’t wait for instinct to take over once more. Her own fist landed on the assailant’s stomach. The thug cried and took steps back towards the alley, bending, as the others turned their heads.

“I will try…” came her honest reply in heavy, accented Tradespeak, as she got up, grabbing her weapon. Almost indifferently, she brought her maul on her shoulder. “…But I can’t promise. Of all depravities and crimes, I despise yours the most, see?”

“You worm!” the man she had punched yelled, even if his voice was not too certain. “We’ll falling kill you! You’re outnumbered!”

“I am,” she replied. “But see-..” she was interrupted as the man roared and charged at her. There was not enough space for a sweeping blow so she stroke vertically, bringing the maul down from her shoulder in an arch, even before the thug had reached a striking distance. The metal whooshed excitedly before it crushed on the man’s shoulder, a vicious crack echoing in the alley.

“…I am already addressing this problem, yes?” That got the others’ attention. They turned to face her properly, drawing knives from their belts.

“Leave,” the man called Jesh said, his expression cautious, calculating, eyeing her armor and weapon. Behind him, the young woman tried to smack him with the plank but the blow was weak by her trembling hands. Jesh shoved her almost absent-mindedly and she dropped against a corner where she curled, folding her legs before her and hugging them, her eyes widened in fear, her throat choking on panicked sobs.

Meanwhile, the wounded man near the warrior’s feet was groaning. She let her leg rest on the man’s head, the boot making him groan even more. “Girl,” she bellowed, her body casting a shadow on the dead-end alley as it covered most of the entrance, leaving only her grey eyes to glitter within her shadowed figure. “I have not fought beyond sparring for six years, four months and twenty one days”. She let the maul slide till it reached the ground thudding, metal first. “So, you will forgive me if I am not as quick as I could be, yes?”

The first to reach her was soon flying, the maul forming a long archway from low to high, dirt trailing behind it before it crashed its way upwards through his jaw. Before his lifeless body had reached the ground under the widened gazes of the other two -making the girl scream with the gory sight- the woman let out a warcry and charged, dropping the maul from her hand. In the confined space of close combat it would do more harm than good. And she wanted this to be close.

She rushed, shoulder first, towards the first one, who let out a surprised yell and stepped sideways avoiding the charge. There was a tiny flash and a clang, as his short blade slid across her shoulder-plate, sparks flying and metal sighing with a shriek.

Before the thug had managed to retract his hand, she turned, grabbing it and violently turning him to cover her back. The other man’s dagger pierced through his own comrade’s neck, aiming at where hers had been moments before and barely not reaching it. Showered in her enemy’s crimson, she let the body fall and she turned and punched Jesh in the face with a metal gauntlet, then grabbed him by the neck with the other keeping him at arms length. The knife flashed again but the blow was cut short, as the thug’s head met forcibly the wall behind him.

“Drop it,” she said coldly but the man pulled his hand to stab again, only for it to fall weakly as his head was smashed against the wall harder. Crimson tinted the wood and drops fell on his back.

“Drop it,” she repeated, her bright gaze piercing him and this time the thug complied.

“Good,” she said and kicked the knife away. “Go help your comrade by the entrance,” she went on. “And do not even think about trying anything, yes?” Jesh nodded and, released by her grip, he coughed, dropping on one knee. But the moment she stepped back, he rushed towards the girl, drawing another knife from his boot.

There was a word shouted. The ground erupted in a spike, sharp enough to pierce through air, flesh and bones, just as Jesh was leaning to take the girl hostage. It stayed there for but a moment, then it crumbled, leaving the man to drop lifelessly next to the screaming girl. She was still screaming as the warrior approached her.

“You are safe, girl, yes?” she said almost merrily, a bloodied figure with wild hair, a swollen cheek, bright eyes and scarred face, blood dripping from her hair and an open smile showing a missing tooth. “I am…”

She sighed, tired, then allowed herself to pant freely for some moments, the calm facade dissolving, touching her swollen face with a wince. With her composure regained, she groaned as she picked up the girl, carrying her to the exit of the alley. She stopped there and looked down at the man with the broken collarbone. He was groaning, barely moving, face buried in the dirt.

“I did try,” she said and made to move on but stopped again.

“But not much,” she added before leaving.