The Pantheon and the Aspects 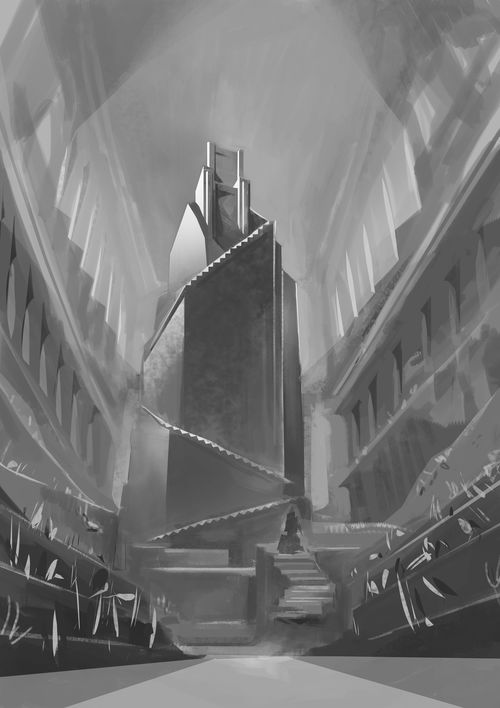 Considering the mosaic of different tribes, cultures and even languages that were assimilated by the Old Dominion, one can begin to glimpse the herculean task that Hazlia undertook in the creation and shaping of the Pantheon. His success allowed him to establish himself as the leader of the Pantheon, wiping most other religions and practices that did not worship him as the Allfather. By the time Hazlia decided to shape the Pantheon around him, his insight of the human psyche was immense. This is made evident very easily as the image of the Pantheon he helped forge persists to the present day, expressing humanity’s desire to worship throughout the ages. Twelve were the Pantheon’s main deities, each, however, with a retinue of lesser deities, demi-deities, angelic figures and servants, expressing more specific virtues of each deity’s aspect, to ensure their control. Indeed, to this day, there is a direct correlation between the roles of Hazlia’s Pantheon, for instance, and the Deist Aspects of the Hundred Kingdoms. Even the Theists, in their intricate tenants of their worship that hide behind the idea of a single deity, recognize and worship separately lesser expressions of Theos’ Will, as well as Archangels and Saints that mirror these archetypes.

“Then I saw the first of lights and heard one of the seven speak with the voice of authority, ‘I am come’. I looked, and behold, the brightest of the sun’s gold rays crowning His head, a hammer in one hand, His other hand empty, waiting, Hazliah, Samash, Ra-Solificus, Eliah, the Lightbringer, the Son of Light, the Allfather, the Fountain of Creation.”

“…there is no known civilization, modern or ancient, living or extinct, that does not include the Aspect of the Mother in their worship. From Demtra, the old Heleton goddess, or Nen Ishtra, the Fertile Mother of the Neantalii, to Yin-sha, the seed of Yeenlong found even inside Yankuma, and Um’a, the first woman of the Khalifates, the Mother is not only worshiped but adored as a very important figure. Even the strictest of Epestimons of the City States, in their flat-out denial of any worship, have personified ‘Sophia’, the wisdom of knowledge, in avatars similar to that of Ninuah.”

The Knight“My sword to you, Protus, warrior divine,so that it is drawn for Your Glory.My shield to you, Sabaus, celestial protector,so that it guards through Your Grace.My mind to you, Ninurtu, wisdom of war,so that it follows in Your Virtue.My death to you, Cleon, First of Knights,my Gift for all of Yours.Whether I live or die, I am Yours.Holy, holy, holy, lord Knight,Glory to Your name, Thy will be done.” –  The Last Battle Prayer of Legion XII, Pertinax

“The Seer, or the Bureaucrat in the modern form of the Aspect according to some Deists, was possibly the least celebrated deity of the Celestial Host and yet among the oldest archetypes known to mankind. For the ancient Pehkts, before being assimilated by the Dominion, the Aspect was the creator, the godchild Nabu-Astertis, roaming the night skies as the constellation known to them as the Boatman and to us as the Scales. All life, the Pehkts believed, is but the stories devised by the Skysailor. When astrology spread and the Dominion expanded, Nabu naturally followed as a deity of prophecy and knowledge, abandoning his boy incarnation and fusing with Orcos the Star Seer of the Seromians. It was only during the later days of the Dominion that he assumed the role that distanced him from everyday worship, as the judge of the departed, knowing, better than anyone, the secrets of all souls.”

“…of endless shifts, witty and cunning, a robber, a horse thief, a bringer of dreams, a watcher by night, a thief at the gates, one who was soon to show forth wonderful deeds among the gods and mortals, with names as many as the orange feathers in his hair, Bakkus, Stanumus, Liokundis, Dionos, Ermus, the tempter of odds, the trick of light, the laugh of God.”

“But the Crafter is now a burden. It limits him as a ruler, it limits his range of perception. From his new position, he begins to see the laws of reality more clearly. So he visits Festus, a mortal smith. He promises him secrets in his craft that no one has ever heard before. In exchange, he is to live in solitude, deaf and mute to this mortal world. The mortal agrees. Festus becomes a living legend, playing a vital role in the technological peek the Dominion reached and, in time, the Crafter aspect shifts from Hazliah, who can now expand fully to the Father. Hazliah becomes the Allfather, a god thus far unnamed and unshaped. Under the faith of mortals, reality shifts: Hazliah is and has been the Father, the Ruler, King of Gods and Men. Festus is the Crafter. But hints remain that betray the truth. “…the red fire of creation in his hair, forgehammer in one hand and pliers in the other, Festos, Svarogos, Volkanus, Hazmash, the one who makes, the forger of all crafts.” How different really is the imagery from the Father, with the “sun’s gold rays crowning His head, a hammer in one hand”?

– Forbidden Texts of the Paeneticum Library
Attributed to the Anathematic

“Then from the presence of all the seven I saw an eighth light and heard its voices speak in unison, ‘I am come’. I looked, and behold, clad in translucent robes, two bodies, backs united, the Lady, Kirke, Aurora, Zorya, Eccateh and the Lord, Hekas, Aratrus, Volos, Metatros, the masters of possibilities, the lord of skies and lady of earth, the artists of creation.”

(The Beast and the Barbarian)

“Much like the Magi, the Untamed presented a dual manifestation, its visage a combination of man and beast. At first, those were possibly heavily influenced by the pagan tribes who worshiped animal gods in the Old Dominion but in time the two faces of the Untamed were split into what would become the Beast and the Barbarian. Today they are worshiped by and large separately, but the very existence of the Nords explains the Untamed’s persistence in being remembered as a single entity, now and then. The difference of the two aspects lies in their place, of sorts, but their core remains the same: whether by nature or choice, the Untamed exists outside the established society of man.

The Beast is the Untamed Wild, the part of the world that can never be part of civilization. To this day, Deists often name wondering monsters as its manifestations. There is a tendency to perceive the Beast as evil but, as the Deist Questor of the Beast, Rolf Homkonsen, has written in his “Beast Within”, it is not so, even in its most monstrous apparitions. Gugalann, the Chimaera with the Three Mouths: Hunger. Herna, the Antlered Bitch: Parenthood. Minos, the Bullman: Sexual drive. Satet, the Three-Eyed Serpent: Survival; they are instincts, primal urges, stripped from ulterior motives, neither evil nor good and yet the birthing power of both. The very lack of logical, human thought behind those, however, turns the Beast into a very frightening aspect indeed.

The second manifestation is that of the Barbarian and, unlike the Beast’s connection to the Wild, the Barbarian is very much human and often part of society. Both lawless and a lawbreaker, denying to conform to the mandates of civilization, it is really not that hard to understand why the Barbarian was conceived as an Aspect by Hazlia. ‘Buudbhu, Hokar, Ferus, the wild, the lawless, the untouched, the place where all lights aim to reach” says the Book of Light. “Where all lights aim to reach.” What better way for an expanding religious state to convince its subjects to one conquest after the other, than a deity that exists with the sole purpose of being, eventually, conquered but being ever so elusive? Today, while the analogy of the Barbarian to the Nords is obvious and easy, the truth is that the Deists often name agitators, renegades and rebels as Aspects Manifest of the Barbarian.”

“Let Kings worship Rulers and heroes worship Knights! Let the Queens wear the mantles of Mother to disguise their ambition! Let hunters worship beasts and barbarians and let the mages worship twin heads! And while they do so, I ask: who was there in all the battles ever fought? Who fought with nature over crop fields at all times of peace and fought enemies over battlefields at all times of war? It was no King or Queen. It was no mage. It was no Knight. They only exist to revel in moments of history, not every day. It was you, people! The simple people, the true people! You have your own Aspect, your own protector! You who work tirelessly! You who fight endlessly! Remember the poet:‘Who bears the greatest burden I wonder?The greatest king’s head? A single crown it lies under.But who carries the scythe and who carries the spear?Who fought without choice yet also fought without fear?The weight of history always fell on one’s shoulder.Hail thee, unsung hero! Hail thee, unknown soldier!’ ”

– Questor of the Soldier, Doan Johanson

“Sometimes one must wonder on the nature of the heathens. Often has the Church been chastised for its denial to accept the so-called ‘Lover’ aspect as a Saint, claiming there are no examples of lovers in our prayers. They say we deny our faithful something natural. I say the quality of one’s faith is measured by its teachings. What do they say? What do they worship? Amos was the Archer whose arrows started the War of Eleven Lilies in Galania, before the Empire, say the Galan Deists, bringing ‘love’ to youths of multiple feuding families. Eros, says an excommunicated poet, is the cause of misery that took the life of two blooming adolescents, by their own hands no less, in that play so loved by wistful youth of the nobility. Innadite was the temptress who offered another’s wife to Pareon, igniting the Allerian campaigns. Further back in time, Isha, another Archer apparently, spread chaos among the clans of the Nean people, before salvation came by the Old Dominion. They say they preach love but all they really preach is war and chaos. They say such is our world but I say such is them”.

“Deists proclaim the Wanderer exists in every age. Ha! Fools. I have searched far and wide and in all my travels and all my exploits I have never encountered such an entity.”

“Perhaps the most bizarre apparition of the divine in the Old Pantheon was the Victim. It never bore a name and its church was always small and disregarded by history as a non-factor. There is strong evidence that it endured the long centuries leading to Hazlia’s Fall, where, ironically, it was destroyed entirely as they never joined the refugees, but rather stayed to help those in need in Capitas; after all, they were many. Very few Deists remember this Aspect today and even fewer venerate it but the truth is that their charity work is unparalleled and their paradigm simple: Say a prayer for the fallen and remember their innocence.”

The Last to Stand Guard